To blog or not to blog…

I have learned that there is a huge difference between knowing how to do something, and knowing how to get something done, however the difference isn’t what you might think. When it comes to technology I really am nothing special, in fact based on some of the guys I know, I  am sub-par. I know that I will most likely never have the innate knowledge of system, acoustics, and DMX that some of the guys I know do. I know video, and I know more about it then the majority of people, but I also know enough about it to realize how little I know. I like the analogy Pistol Pete Maravich used, I guess it was in a movie about him, but he holds out a basketball and says “This represents all there is to know about basketball”. Then he draws a circle on the ball and says “This is what I know about basketball”. Then he draws a dot inside the circle and says “This is what you know about basketball’.

The reason I have been able to do anything video related professionally is I know how to get video work done, even if I sometimes I don’t really know what I am doing. So if you are like me and only have a dots worth of knowledge about what you are doing, how do you get a circle? My answer, cheat! I went to a military college for the first year and half I was in college, and my company had the unofficial motto of “if you ain’t cheating, you ain’t trying” which was usually followed by “if you get caught cheating, you ain’t trying hard enough.”  I always laughed at that saying until I started working in tech ministry, then I discovered the truth to it. It’s actually gotten to the point I always make my younger volunteers and interns repeat to me “if you ain’t cheating, you ain’t trying”. All too often in the tech ministry we are encouraged to cheat to get the result we want. I think it helps that most tech guys are outside the box thinkers so once they get a thought they worry it like a dog with a bone.

At this point you might be asking yourself, how are you cheating? Well perfect example, at the church I used to work at they use the North Point model for video display at the multi-sites. Which means they are playing back 2 video feeds at the same time, which is way tougher then one would think. This is done by playing the videos into 3D recorder which thinks it’s getting red/blue video, but what it’s really getting are 2 different videos. Cheating. Pretty much any outside the box thinking or application I consider cheating.

Since rarely do we have the budget, training, or time to do things the “right” way most of the time we have to make things up as we go. Often times I have found myself discovering a work around to get something done, and ended up doing it in a way that no one ever intended it to be used.  That was one of the more exciting things about NAB this year, everyone jumped on the 4K bandwagon. Honestly I don’t think it’s really a big deal yet, maybe it’s ok for post produced work, but I don’t think it’s ready for mainstream live production yet. However, what excites me about 4k is the opportunity you have to cheat with it. How? Well you have to think about 4k in it’s component parts, not as the sum of the whole. Traditionally the way you achieve 4k is by taking 4, 1080p video signals and putting them to gether edge to edge like this: 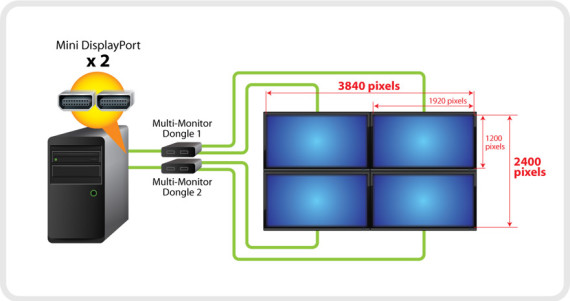 Now I personally thing 4k is still years away from being used in prime time as far as live productions, but there are some potential applications that make me excited about the fact that everyone is jumping on the bandwagon. The first really good application I see for 4K is multi-camera environment recording isolation or isos. If you have a 4 cam IMAG environment being able to send all 4 cams to one recorder which will record them all synced is pretty cool. Especially if you are having to make a broadcast edit in post, having all the potential footage synced ready to use is huge.

Another cool application is expanding the current North Point model of multi-site. Imagine being able to send a campus 4 synced pieces of info; a tight shot with notes, a wide shot for the stage, and discrete note feed for campuses that need a local copy of notes to distribute to sources the other campuses don’t have, and a broadcast mix for overflow and second room distribution so your axillary spaces don’t get the boring IMAG feed. Now imagine that all in one package, on a single drive of some type or just being pulled down right off the internet that way. It’s VERY cool way of thinking about it, the problem is while most church tech people can see that potential immediately many manufactures can’t see it at all. I have talked to engineers at several large video manufacturing companies (you would know them if I said them) about this and always I get the same response “you can’t do that.” Which always leads to me responding “no YOU can’t do that, but if you would just think about it you would realize yes you can.” The hang up on the 4k idea in particular is what does the 4k image look like? Well it looks like 4 TV slammed together all on different channels. Which always make the manufacturers go “no one would use that.” Which is correct no one would use the entire 4k image, you don’t want them to, you want them to use the sum of the parts, because in this case they really are greater then the whole.  However, you have to be willing to cheat.